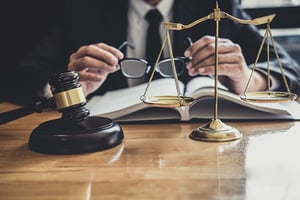 Tax crime can ensnare even those whose livelihood involves helping others out of their legal troubles.

A Connecticut man was found guilty in April of this year of tax fraud, including three counts of filing fraudulent income tax returns and four counts of failing to pay income tax due. While these types of criminal tax charges are common, the defendant, Mr. Deron Freeman, is an attorney.

Mr. Freeman works mostly in personal injury and criminal law, which would give him deep knowledge of the truth and consequences of criminal tax investigations. Mr. Freeman came to the attention of the Internal Revenue Service (IRS) when he neglected to pay his tax liabilities between 2006 and 2010. Despite receiving notices of penalties and interest due on his arrearage, Mr. Freeman did not work with the IRS to mitigate the damage. As a result, in 2010, the IRS proceeded with a suit for collection of taxes and penalties due for 2007, 2008, and 2009.

It is worth pausing here to note that it is always better to work with the IRS before a collection action or other formal proceeding is commenced. Ideally, taxpayers working with an experienced criminal tax defense attorney can intervene in the forward movement of a civil or criminal tax audit or investigation. Most of the time, the earlier a tax controversy is addressed, the more options there are for resolution.

By 2011, Mr. Freeman agreed to a payment plan with the IRS—a valuable strategy for diminishing risk of further litigation and taking a step toward clearing a tax debt. Yet, at about the same time, Mr. Freeman opened a bank account in the name of a third-party into which he deposited hundreds of thousands of dollars. The account shielded the money from the IRS and the ongoing payment plan.

Mr. Freeman remained faithful to the payment plan and by 2012 had paid down enough of the debt that the IRS dropped a lien for taxes due in 2008. At about that time, Mr. Freeman moved about $250,000 from his shell account into his personal investment fund. In subsequent tax years, Mr. Freeman filed false tax returns that did not accurately report his income, nor did he pay taxes owed in 2014 and 2015. Overall? Mr. Freeman chose not to pay taxes on almost $1 million in income.

Like many people with a taste for luxury and having extra cash on hand, Mr. Freeman built a new home, bought cars and watercraft and lived with ease—until he was convicted. Currently out on bond, Mr. Freeman has not been sentenced but faces approximately 13 years in prison.

Tax crime can pay for a while. After that, you can pay for a long time and lose your liberty while you are at it. If you are aware of IRS interest in your business affairs or if you are selected for an audit—speak with a trusted tax lawyer.

The legal team at Robert J. Fedor, Esq., LLC delivers strong legal representation to clients throughout the U.S. and abroad on matters of tax crime, compliance, or IRS criminal or civil audits. When you have tax questions, call us at 800-579-0997 or contact us. We have offices in Cleveland and Chicago.