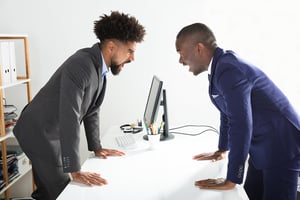 This story has it all. Shell companies, offshore tax hacks in the Middle East, tax fraud, conspiracy to defraud the US, false tax returns, a falling out between old college buddies, and more.

Texas attorney Steve Pursley and his college friend Shaun Mooney were in business together.  Mr. Pursley represented Mr. Mooney, who owned Southeastern Shipping Company, a company that provides workers to offshore rigs in the Middle East. According to the indictment, Southeastern Shipping is incorporated in Panama, the Isle of Man, and Nevis. Nevis is a small island in the Caribbean.

So far, so good. There is nothing illegal about foreign incorporation or foreign bank accounts, as long as they are properly set up and noted in FBAR and other regulatory filings.

Through an IRS criminal tax investigation, it was discovered that the business partners were concealing Southeastern Shipping profits returning to US coffers. Unreported income of approximately $18 million flowed from a business account on the Isle of Man to the US, but it often came in the guise of stock purchases in shell companies owned by the partners.

Complex arrangements to protect and funnel funds around the world are not new, and not necessarily illegal. We just discussed a tax case won on appeal by Amazon. The financing was set up so well that the IRS went after Amazon not for what they did—but how they did it. More precisely, how Amazon valued their intangible assets on which it reported. In the case of Mr. Pursley, we again have a complicated financing structure—with profits from the Middle East flowing back into the US through shell companies. The catch comes when Mr. Pursley and Mr. Mooney concealed the money being repatriated to the US.

Both men were eventually charged, with each attempting to throw the other under the bus. Mr. Pursley eventually filed a civil action against Mr. Mooney.  The IRS charged Mr. Pursley with illegally profiting to the tune of $4.8 million, filing fraudulent tax returns, and tax evasion when he withdrew the cached value through non-taxable loans to himself for the purchase of goodies such as holiday home in Vail and real property in Texas.

Mr. Pursley was convicted and set for sentencing in December of this year. In addition to a potential 20 years in prison, there are fines, restitution, and probation.  Easy come, not so easy go.

Serving clients nationwide from offices in Cleveland and Chicago, the law firm of Robert J. Fedor Esq., LLC  provides strong and strategic legal guidance if you are subject to an IRS audit, or allegations of a tax crime. Call us when you are aware you are under investigation—or when you receive notice because better earlier intervention often leads to better outcomes. Contact our legal team today.