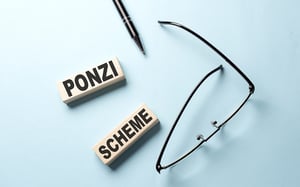 Time and time again, Ponzi schemes seem to resurface in this blog. But in this particular fraud case, it hits a little closer to home since over 70 Ohio residents were taken in by this scam.

Matthew J. Turnipseede, 49, of Las Vegas, Nevada, was charged on August 11, 2022, in a 13-count indictment with defrauding approximately 72 investors in the Northern District of Ohio and elsewhere out of more than $8.5 million through a Ponzi scheme that promised investors double-digit profits achieved through various sports wagering businesses.

The defendant was officially charged with 12 counts of wire fraud and one count of mail fraud.

According to the indictment, from March 2015 to May 2021, the defendant induced victims to invest money in companies that he owned, namely Edgewize LLC, Moneyline Analytics, Moneyline Analytics Dublin Branch, and another company incorporated by Turnipseede, by falsely claiming that investor funds would be used to make sophisticated sports wagers according to an algorithm that generated double-digit returns.

According to the indictment, none of these companies ever generated the promised profits, and instead the defendant used investor money to maintain the business, seek new sources of funds, pay off earlier investors and fund personal expenses.

The indictment alleges that the defendant provided victim investors with operating agreements in which he claimed that all money invested would be used exclusively to place bets on sporting events and that the defendant would not be paid any compensation for placing the wagers but would retain a percentage of the winning profits.

To perpetuate the scheme, the defendant is accused of periodically emailing fraudulent financial statements to victims purporting to show substantial gains on their investments and employing an accounting firm to generate IRS forms based on fraudulent figures provided to the firm by the defendant. The indictment alleges that the defendant’s sports wagers never generated the promised profits for investors and that the information provided to the accounting firm was fraudulent. It is alleged that if a victim sought to withdraw some or all of their investments, the defendant used money from other victims’ contributions to cover the withdrawal.

In addition, it is also alleged that the defendant used investor funds to finance his personal expenses, including family vacations to Disneyland and Hawaii, spa treatments, lease payments on multiple vehicles, and country club membership dues.

Since the press release came out, on September 8th, 2022, Turnipseede plead not guilty to the charges and now awaits trial.

Ponzi schemes are nothing new and it will be interesting to not only see how this plays out and if the IRS gets involved. Oftentimes, orchestrators of this traditional type of investment fraud fall under the radar of the IRS.

Serving international and local clients from offices in Chicago and Cleveland, the legal team at Robert J. Fedor, Esq., LLC is highly experienced with tax law. We provide discrete legal services if you face a tax controversy. Contact us online or call us at 800-579-0997 today.