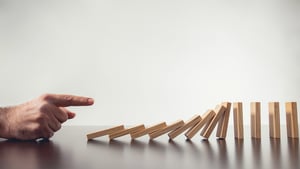 The long reach of the Panama Papers document leak toppled another executive after international tax fraud and money laundering allegations came to light.

As we discussed earlier, the Panama Papers is a trove of more than 11 million documents that were leaked from a Panamanian law firm in 2016.  The papers pulled back the curtain on the secret offshore tax financial dealings of individuals, companies, and countries around the world who engaged in illicit tax practices to shield their wealth.  The fallout from the leak, and ensuing international investigations, continues to roll out.

Most recently, the scandal tripped up the chairman of Swedbank, following charges that the bank engaged in money laundering and tax crimes to funnel money from dirty sources for European politicians and Russia oligarchs.

Lars Idermark was the chairman of Swedbank.  As criminal tax fraud investigations point to Swedbank, Mr. Idermark stepped away from his role due to the intense media interest.  In a statement, he remarked, “Following recent strong debate about Swedbank and questions about the bank’s control of suspicious money laundering in the Baltics, I have concluded that the media attention is not compatible with my C.E.O. role at Sodra.”

For Mr. Idermark, his chairman role was not his day job.  His immediate exit quickly followed the termination of Birgitte Bonnesen, the former CEO of Swedbank.  Ms. Bonnesen had oversight responsibilities of bank subsidiaries that are implicated in money laundering schemes in Baltic countries.

Despite the departure of Mr. Idermark and Ms. Bonnesen, Swebank still faces stiff challenge to its foreign bank account practices by regulators in the United States, Sweden, and Estonia.  Media reports suggest the company may have laundered upwards of $23 billion for individuals and groups seeking to avoid tax liabilities.

Just as the Panama Papers brought these practices into the open, ongoing tax audits and investigation will continue to rewrite the reputation and fortunes for those involved.  If you are approached by the IRS, seek knowledgeable legal advice quickly.

Robert J. Fedor, Esq., LLC provides superb legal representation if you or your company are facing questions about a tax audit, FATCA, or your FBAR filings. We provide knowledgeable legal counsel and committed personal representation.  Contact us or call 800-579-0997 today.