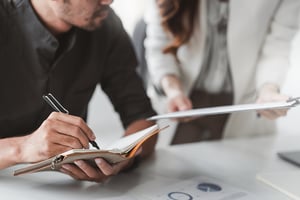 The Senate Finance Committee recently released an investigative report that identifies a loophole allowing offshore banks to accept and hold funds for U.S. taxpayers without reporting to the IRS.

In late August, the Senate Finance Committee made public an investigation that was originally aimed at Robert Brockman, a billionaire accused of hiding more than $2 billion in offshore tax havens and foreign bank accounts to avoid tax liability. He was charged on 39 counts, including money laundering, tax evasion, failure to file an FBAR, and other criminal tax matters. Mr. Brockman died in early August, but his legacy and the criminal tax charges faced by his estate live on.

In exploring the regulatory framework around Mr. Brockman’s operations, the Finance Committee discovered a deep and wide loophole whereby Mr. Brockman was able to designate offshore shell companies as “shell banks.” By exploiting a process by which the Internal Revenue Service (IRS) issues Global Intermediary Identification Numbers (GIIN), Mr. Brockman and his staff transformed shell companies into shell banks legitimately sanctioned by the IRS across the eight countries where he maintained financial accounts.

Essentially, shell banks with a GIIN are not subject to “further review, identification or reporting” which means the money they transfer to a Swiss bank is not subject to FATCA agreements that would otherwise require the Swiss bank to report the money to the IRS. According to the Mirabaud report (so-called because it is the name of the Swiss bank that held accounts for Mr. Brockman), it may not be surprising that Mirabaud bank officials claimed no knowledge of the tax crimes of Mr. Brockman until after his indictment was announced. According to the Senate Finance Committee, transactions processed by the bank for Mr. Brockman between 2010 and 2011 amounted to $943 million, which represented about half of the net new money flowing into the bank. The Committee notes the average Mirabaud client held $1.5 million in assets while the value accounts of Mr. Mirabaud were approximately 600 times greater.

The investigation report is high-quality reading. It even includes a section entitled “Cheat Sheet:  How to turn your shell company into an IRS-approved shell bank.” The chart identifies key steps in the process, the results, and the beneficial tips, including “it is highly unlikely the IRS will detect whether these accounts are concealing or underreporting assets held by U.S. persons.”

Despite this helpful guide to exploiting the loophole, Senate Finance Committee Chair Ron Wyden reminds his audience of the decades-long partisan effort to defund the IRS to avoid identification of loopholes such as these, and enforcement actions against those who commit tax fraud. He suggests the new funding for the IRS provided in the Inflation Reduction Act would be well-used to increase investigation and understanding of these types of tax scams. Beyond that, he is working on legislation to close the loophole.

From offices in Chicago and Cleveland, the tax attorneys at Robert J. Fedor, Esq., LLC help individuals and entities nationwide respond to IRS correspondence and audit inquiries. When you need trusted tax advice locally or abroad, contact us or call 800-579-0997.