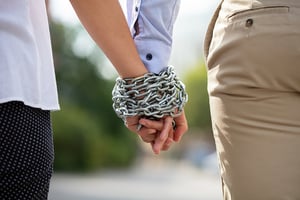 Tax crime pays—for a while. A North Carolina couple recently learned how expensive tax fraud can really be.

Earlier, we discussed the interesting matter of Dr. James Rice and his wife. An orthopedic surgeon, Dr. Rice and his wife ran a private practice in Pinehurst. The pair decided to stop paying over their employment tax obligations to the IRS in 2007. The taxes, collected from the wages of their employees, eventually totaled $580,000 by 2016 when agents conducting an IRS criminal investigation came knocking. As well, the couple dispensed with income taxes altogether between 2014 and 2016—failing to declare and pay their own tax liabilities.

In late January 2022, Dr. and Mrs. Rice were sentenced to five years in prison. They must also pay $2.4 million in restitution.

Special Agent Donald Eakins with the Charlotte Field Office said, “Failure to pay over withheld taxes is a serious offense. Employment tax evasion results in the loss of tax revenue to the U.S. government and the loss of future Social Security and Medicare benefits for those employees. The investigation of employment tax fraud is a priority for IRS Criminal Investigation, and our special agents will vigorously pursue anyone who collects these taxes and then uses the funds for their own personal gain.”

It is the job of the IRS to pursue those seeking illegal profit by bending and breaking laws around employment tax, offshore taxes, money laundering, or foreign bank accounts. For those who would never dream of being involved in a criminal tax matter, a prison sentence sounds fitting. For individuals who are currently involved in a criminal tax enterprise, a prison sentence of five years is chilling.

Dr. and Mrs. Rice took their best shot and lost big time. We do not know what measures were taken to try and avoid a jury trial involving overwhelming evidence against the defendants. If you find yourself the target of a criminal tax investigation, the advice is unequivocal—speak with an experienced criminal tax defense attorney as quickly as possible.

From offices in Chicago and Cleveland, the tax attorneys at Robert J. Fedor, Esq., LLC help individuals and entities nationwide respond to allegations of criminal tax fraud, IRS audits, and other tax controversy. When you need responsive, legal advice locally or abroad, contact us or call 800-579-0997.